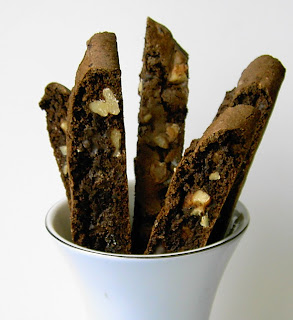 The plan for this week's post was to make traditional Italian biscotti, but after finding that I had no anise flavoring, I decided to make chocolate biscotti and make the traditional one another time.

I always thought that the best chocolate biscotti I ever had was the one from Meredith's Bread at the NY farmers' markets, but while their biscotti is still fantastic, I really do think this Amy's Bread recipe beats it.

The recipe Is actually chocolate and hazelnut, and I know I have a habit of replacing hazelnuts in a lot of things. It's not that I hate them, I'm just not a huge fan of them and would always prefer walnuts or almonds, especially in biscotti.

I'm just going to go ahead and say that I think it's pretty much impossible to get a better chocolate biscotti than this. I'm amazed at the perfection of this recipe.

These indulgent biscotti have just the right amount of sweetness and are beautifully studded with bits of chocolate and nuts. They would be a perfect accompaniment to the end of a Christmas or Thanksgiving meal with coffee as they are not overwhelmingly rich but hit the spot when in need of something sweet and chocolatey. 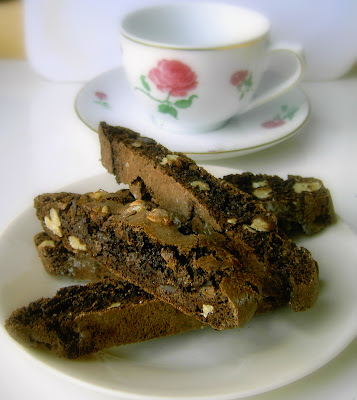 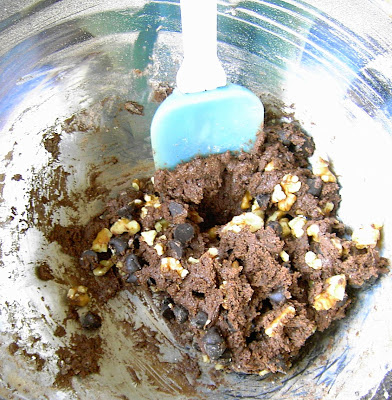 Pre-heat oven to 350F and line a large baking sheet with parchment paper.

In a large bowl, cream together the butter and sugar using an electric whisk.

Add the eggs and vanilla and whisk until fluffy and pale (1 min).

Sift in the flour, cocoa powder, coffee powder, baking soda and cinnamon. Fold this in to combine.

Then fold in the toasted nuts and chocolate chips. 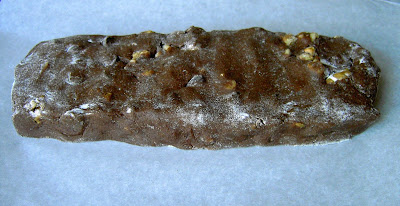 Divide the dough in half and turn each one out onto a floured surface and roll each half into a log and patting down slightly to form the dough to approximately 2 inches wide by 14 inches long by 1 1/2 inches high.

Place each log on to the prepared baking sheet several inches apart.

In a small bowl mix an egg and then brush the egg wash lightly over the top of the logs.

Bake in the middle of the oven for 27 minutes, rotating the baking sheet half way through.

Remove from the oven and turn the oven down to 300F.

Allow the logs to cool for about 20 minutes before slicing them at an angle to about 3/4-inch-thick pieces. 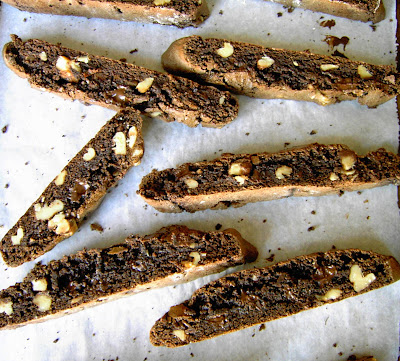 Lay each slice back on a baking sheet lined with parchment paper leaving at least 1/2 inch of space between each.

Remove them from the oven and allow to cool fully. 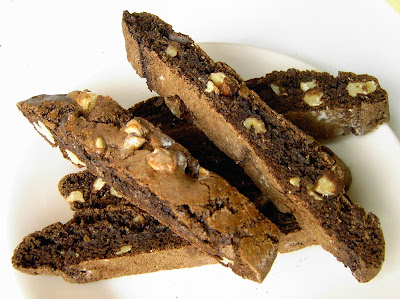 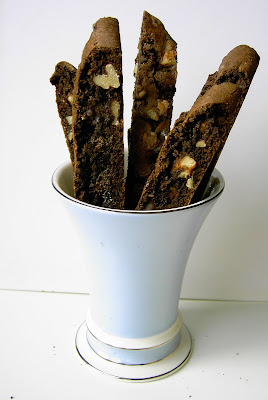 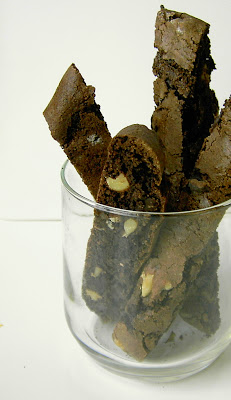 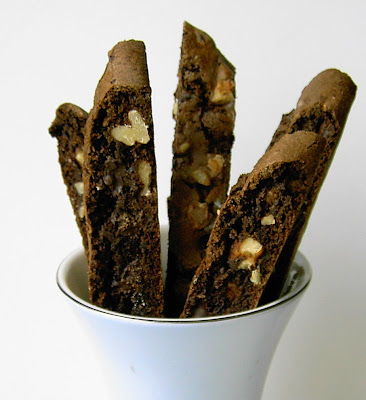 Posted by A Bowl Of Mush

Please give credit to anything that you find on this blog and link back to the original post. Please do not use any of my photography without permission. Thanks!